If you had asked me last February what I would be doing during the week of February 3rd from February 9th, I would have answered "the Sapporo Snow Festival, of course." Man plans, God laughs.

Instead, we enjoyed our 6-night winter vacation at the Red Cross International Hospital. We were originally supposed to stay only 5 nights, but we were having so much fun that we stayed for a 6th night.  Actually, I developed an infection with a very high fever, so they kept me in for an extra night to pump me full of antibiotics.

What did we think of it?  To paraphrase an American friend who used a different hospital, "I thought I would be bored with five days in the hospital, but it went by so fast. I can't imagine being released after only two days."  We felt the same way and were especially happy that we were still at the hospital on Wednesday night when I came down with a fever. I absolutely did not get bored. In fact, I was thrilled to have someone bring me three healthy meals and two snacks a day; midwives to show me over and over again how to breastfeed; and a buzzer to to ask for more ice, more heating pads, more pain reliever, more whatever I needed. They were probably relieved to see the buzzer-happy American finally check out. Over 6 nights, 7 days, I only left the maternity ward once - a trip down to the very well-stocked convenience store on the first floor to pick up some baby items for home.

The experience was part maternity boot-camp, with a bit of spa-like treatment and a no-pressure "Avon lady" thrown in.

Maternity Boot-Camp:  Every day at 11 am, the maternity ward plays a short informational video about life in the ward. Every mobile woman is expected to traipse out to the lounge area the first day after delivery to watch it. The dozen or more women who gather daily look more like wounded warriors in a military hospital than new mothers, though perhaps there is some equivalence.

Some women are fairly alert and attuned to the video, others appear nearly comatose. But all are expected to watch the video to learn the rules of the maternity ward. Never leave your baby unattended; if you are mobile, return your own tray to the  food cart; if you have a shared room without a private bath, schedule an appointment for the shower; also schedule times to use the coin laundry; empty out the diaper pail in your room daily, etc., etc..  Oh, and by the way, there's a "breastfeeding salon" where you can get an awesome massage during your stay with us.

Unfortunately, I was about 15 minutes late and missed most of the key information, some of which I figured out, some of which I didn't learn until Friday. I can only imagine what the midwives thought of the pampered American whose husband stayed with her all week, never returned her own food tray (though Jason figured it out and usually returned it), wasn't emptying her diaper pail and used her buzzer incessantly.

Spa: As mentioned, there was a breastfeeding "salon" where you could receive a masage, drink special herbal tea, practice using a hospital-grade pump, or sit in the coffee-house style lounge seats and practice breastfeeding using their nursing pillows, while flipping through Japanese magazines.

Beyond the salon, the midwives generally provided wonderful, empathetic, and helpful care. Yes, there were rules that you were encouraged to comply with, but they were there to help you when you needed it. It actually was a good mix to encourage self-suffieiency, while providing essential support. And the food was suprisingly good. At the beginning of the week, I was provided a menu and could usually choose from one of two entree options. They designed the meals to provide me with 2200 calories per day, along with certain levels of calcuum, iron, etc.. Kind of like a specially designed menu at a spa.

Avon-lady: It turns out that the well-stocked convenience store features a number of products that you can practice with while staying at the hospital. Hip-slimmer belt: here, let us grab the samples and find the right size for you. Trouble breast feeding: try this pump with these special slow-flow bottles. Not sure how to disinfect bottles: have you seen the Milton disinfecting kit? Oh, you don't want to leave the baby to go downstairs? You can call, place an order and the convenience store staff will bring it up to you. Now that's convenient!

Party: Jason and I commented innumerable times that we couldn't imagine leaving after only two days. I was still so sore after two days and had no idea what to do with this small, hungry baby. However, we did pay for a private room so that he could stay with me (most dads left every night at 8 pm, private room or shared room). Who would ever want to stay in the hospital for five nights in a 4-person shared room?

A friend of ours told us that she loved her two hospital stays in her 6-person room. She said it was like a party where the women sat around reading magazines, sharing advice and the second time around moms helped out the new moms. In the months after she left the hospital, she continued to go out with her hospital roommates. Once again, I'm reminded I should not be so quick to judge things of which I have no experience.

One last surprise about staying in a Japanese hospital: a generally all-inclusive and reasonable price for the entire week. I suspect the pre-imsurance cost of our 6-night stay was less than the typical 2-night stay in the US. We paid extra for the private room, Jason's meals and treatment associated with my infection (mostly covered by insurance), but otherwise we did not have an itemized bill for every painkiller, ice pack, and heating pad that I requested. There was just one fixed cost for normal labor, delivery, and recovery, with room costs varying only by room type.

Actually, there was another surprise. An emergency evacuation drill coincided with our departure. The lobby was full of staff and fake patient volunteers carried out on stretchers. Fortunately, we were warned in advance, so that we didn't freak out over the crowds on what is usually a quiet Saturday afternoon at the hospital. 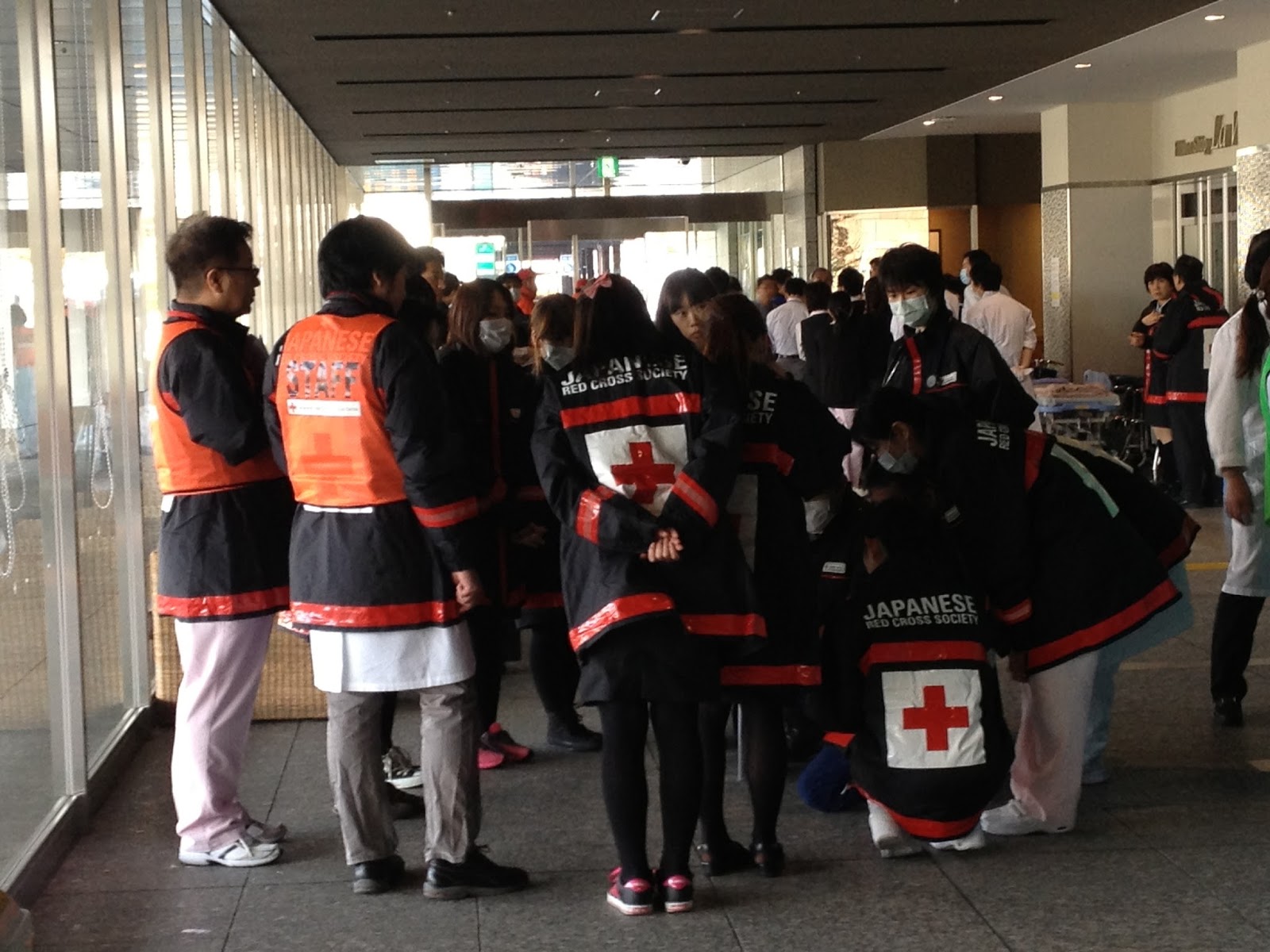